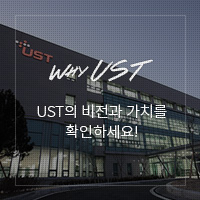 A doctoral student turned researcher on the UST-KIGAM campus 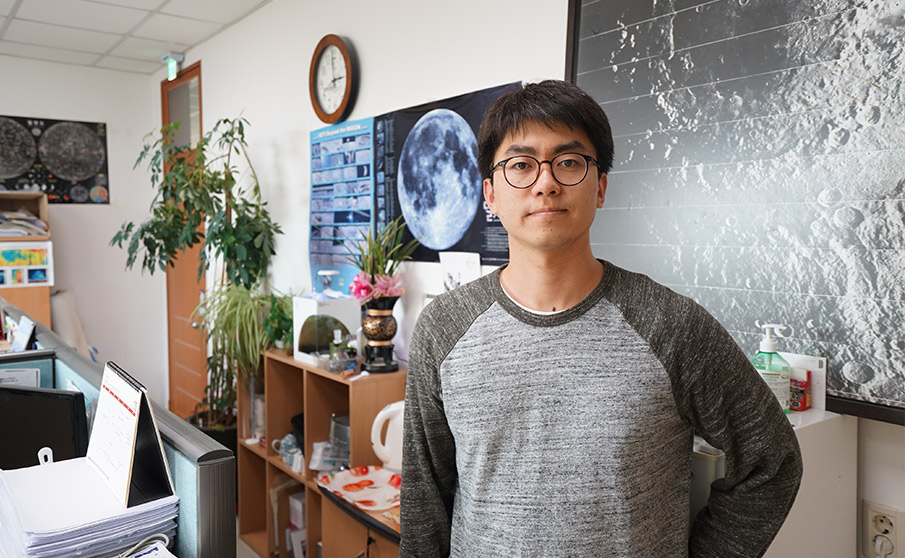 A doctoral student turned researcher on the UST-KIGAM campus

The autumn night is bit chilly, which good for deep thought. Everybody has different feelings and ideas about the night and stars in the sky. Yi-re Choi, who works at KIGAM, is a person who has specials thought about stars. He believes that the moon is the home his lovely baby will go to soon. Is the baby a son or daughter? I did not ask that, but I am sure that it is a device called a gamma-ray spectrometer (GRS). He loves and cherishes it so much. 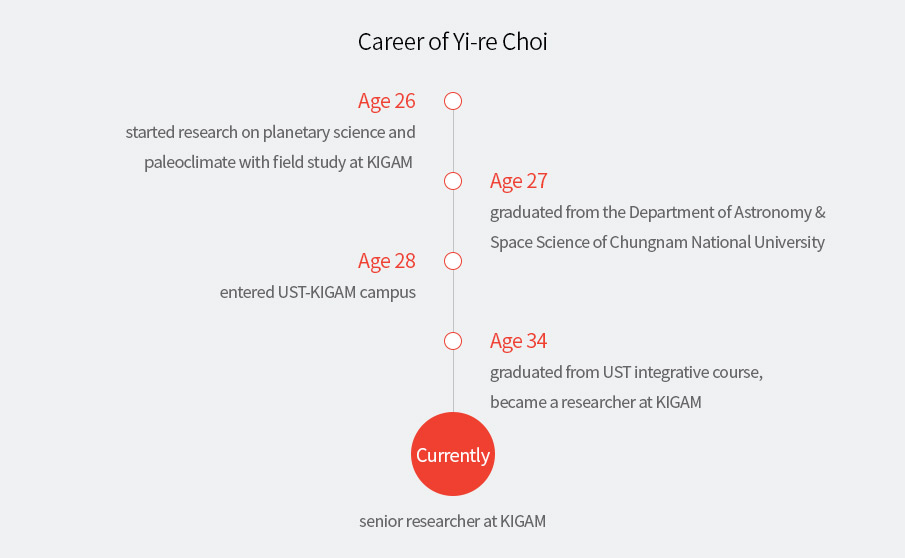 Yi-re Choi is currently developing a gamma-ray spectrometer that will explore elements and mineral resources on the surface of the moon. It will be mounted on the Korea Lunar Pathfinder Mission being developed by the Korea Aerospace Research Institute, which will be launched in 2020. He is so enthusiastic about this research that he calls the gamma-ray spectrometer a “lovely baby.”

“Europe and Russia are intensifying space exploration to build a colony on the moon in 2030,” said Choi, “Korea is also implementing lunar exploration projects in tandem with this global competition. One of the reasons for such an intense race for the moon is about resources. The moon has reserves of scarce resources such as helium-3, uranium, and platinum.” 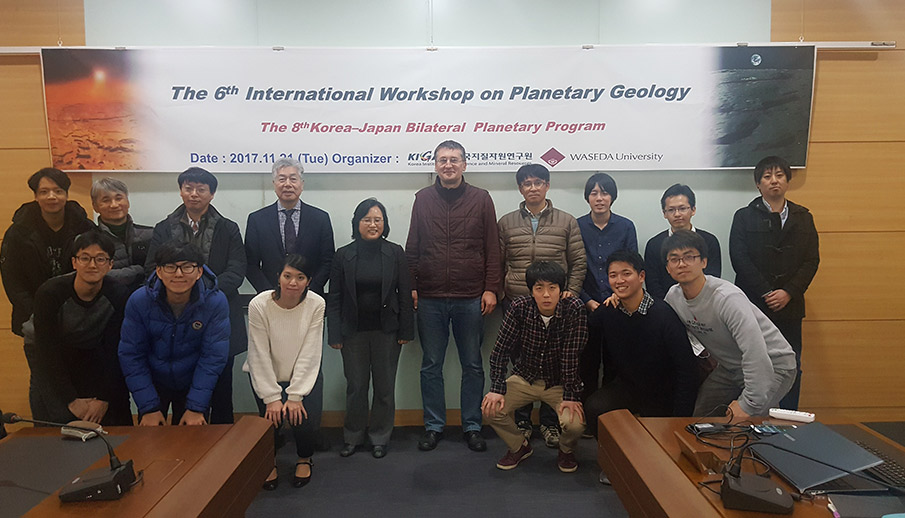 The gamma-ray spectrometer Choi is working on will be used for resource exploration, and thus it is becoming more and more important. He participated in the development of this device since he was in the degree course at UST-KIGAM campus. Dr. Kyung-ja Kim, who participated in the Odyssey mission the Mars exploration program of NASA, was his adviser. 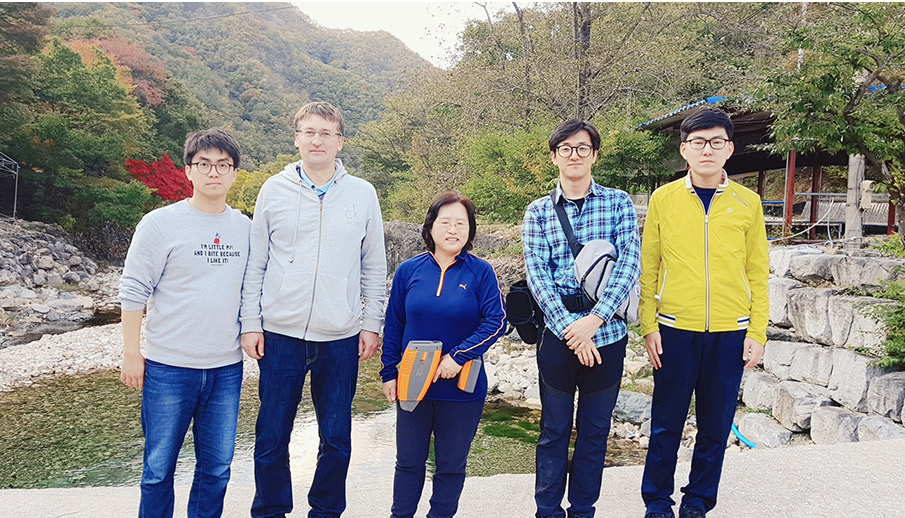 Back in the degree course at UST I was able to participate in a space exploration research project led by my adviser. I acquired professional experience by conducting research on developing and applying the gamma-ray spectrometer. And I met with and learned from scientists from countries with advanced space programs. It was a rare opportunity to join the nation’s first space exploration project. I got this chance because I studied at UST, which is not a common graduate school,” said Choi.

The beloved campus is now his workplace

Choi has been on the UST-KIGAM campus for six years now. He graduated from UST in February 2018, but is still in KIGAM. He works at the same desk in the same research lab in the warm afternoon sunlight. The only difference is that he is not a student, but a researcher.

“Last year, KIGAM was recruiting researchers in my research sector, and I applied,” said Choi, “It seems that KIGAM appreciated the value of my research on the gamma-ray spectrometer and research on paleoclimate using isotopes of beryllium during the UST degree course. Luckily, I was accepted and started work at KIGAM in October.”

When I said, “You became a researcher from a student as you had your own specialty and strength in research,” he replied, “That might be right, but the timing was more important. Back then, there were few people who worked on my field and fortunately KIGAM needed the field.”

“It is very natural that researchers must make efforts,” continued Choi, “Time is also very important. If I could return to the master’s course, I would study data mining or AI, which is now getting increasing attention. I always tell my juniors that they need to have a long-term perspective when they set goals. It may be good to do the research one wants now, but I hope they look at the prospects of any research field five or 10 years from now.” 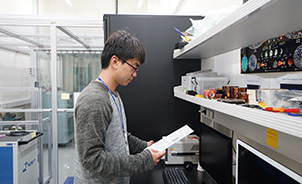 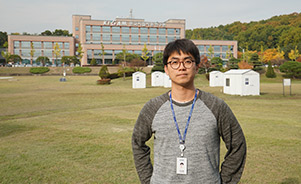 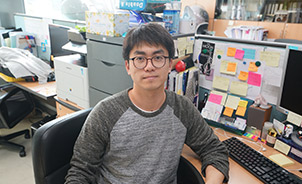 He will keep going with belief in himself

Yi-re Choi, now 34 years old, spent part of his youth on the UST-KIGAM campus. When he was an undergraduate student in the Department of Astronomy and Space Science of Chungnam University, he was able to work in a lab under the guidance of Prof. Kyung-ja Kim at the introduction of his professor. That was a turning point. How has he managed life for the last six years? Wasn’t research boring?

“I do not speak my mind easily,” replied Choi, “During the degree course, I used to be nervous and suppressed my feelings. I was really nervous before the doctoral qualifying exam. I was wondering whether I had to change my research field, but I decided to stick with it and go on with the current field, as I had already started out in it. Surely, students get tired and bored in the course of research. If you find any 1% pleasure in research, even though that is very slight, I encourage my juniors to move ahead with confidence and tenacity.”

After the interview, I followed him to his laboratory where he is developing the gamma-ray spectrometer. It was a small room without windows. So, he was once so engrossed in research that he did not know it was evening. He said his job at KIGAM following the doctoral course is not an end but a start, and that researchers continue to study and continue to change.

“It’s good to have something one is not bored with,” said Choi, “Because it was not boring, I was able to keep doing it.”

Tonight, Choi will again observe the stars in the sky without being bored. He continues to explore the unknown.